The vehicle airbag system is as essential part of car safety.

The vehicle airbag system is as essential part of car safety.  It has been invented because at speeds in excess of 25 mph your car seat belt is no longer adequate.  It is also an immediate MOT failure.

At Greenaway we have been diagnosing vehicle airbags for many years.

There are seven main components of an airbag system:

The airbag is made up of a nylon fabric with a coating on the inside.  It is folded up under padding which is designed to break easily under impact.  There are many locations of an airbag.  They can be fitted in the steering wheel, passenger side front in the seats, in the door cards and even in the roof lining. 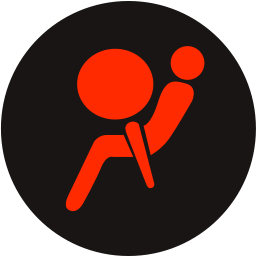 A warning light is used in the instrument cluster.  This should always come on with ignition and then go out after a few seconds.  This is the car completing its own self test.  If it stays on then  there is a fault which means the airbags won’t deploy properly.

The ignitor and inflator can be considered together.  The inflater on the driver side is in the centre of the steering wheel.  It contains fuel tablets in a combustion chamber.  The ignitor consists of changed capacitors which produce the ignition spark.  The fuel tablets burn very rapidly and produce nitrogen gas which is forced into the airbag through a filter which causes the bag to break through the padding in the steering wheel.

An airbag can only ever be deployed once.

The same procedure happens in all airbags around the vehicle.

There is also a number of crash sensors around the vehicle.  A crash sensor is either mechanical or electrical.

The final component is the ECU.  This is basically the airbag brain.  If a fault occurs in any of the airbags it triggers the ECU to bring on the cars airbag light.  These faults can only be read using our diagnostic equipment.  Many faults can be stored in the memory of the ECU.